by The Market Cap
in Market
0

New York – Zachariah Mohammed’s living room is filled with stuff he doesn’t own.

He pays $200 a month for the sofa, side table, bar cart, dining table and four chairs in his living room. It’s worth it, the 27-year-old New Yorker says. If he needs to move, which he’s done twice in the last 12 months, he won’t need to lug a sofa across the city or worry if it will fit in a new place. The furniture-rental startup, Feather, will swap out items for something else.

“We don’t want to be stuck with a giant couch,” says Mohammed, a social media manager at a software company, who lives with his partner and their dog, Remy. 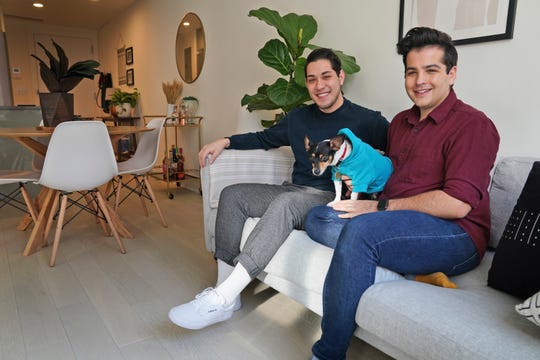 Zachariah Mohammed, left, Pete Mancilla, and their dog Remy in their New York apartment. Most of the furniture including the couch, the table and chairs, the side table and the bar cart, are rented. (Photo: Seth Wenig, AP)

Feather, Fernish and other companies aim to rent furniture to millennials who don’t want to commit to big purchases or move heavy furniture and are willing to pay for the convenience. It’s part of a wave of rental culture that includes Rent the Runway, focused on women’s designer clothing, and even Netflix and Spotify, which let you stream from a huge catalog rather than buy individual TV show episodes, movies or songs.

“They’re moving a lot. They’re changing jobs a lot,” says Thomas Robertson, a marketing professor at the Wharton School of the University of Pennsylvania, describing…

Don’t Start Your Taxes Until You Get These 4 Documents | Smart Change: Personal Finance

AT&T TV Now is raising prices again, this time by as much as $15 per month

Frictionless trade with the EU will end in 2020

Bitcoin Is Still In Midst of Bull Market; Why On-Chain Analysis Suggests So